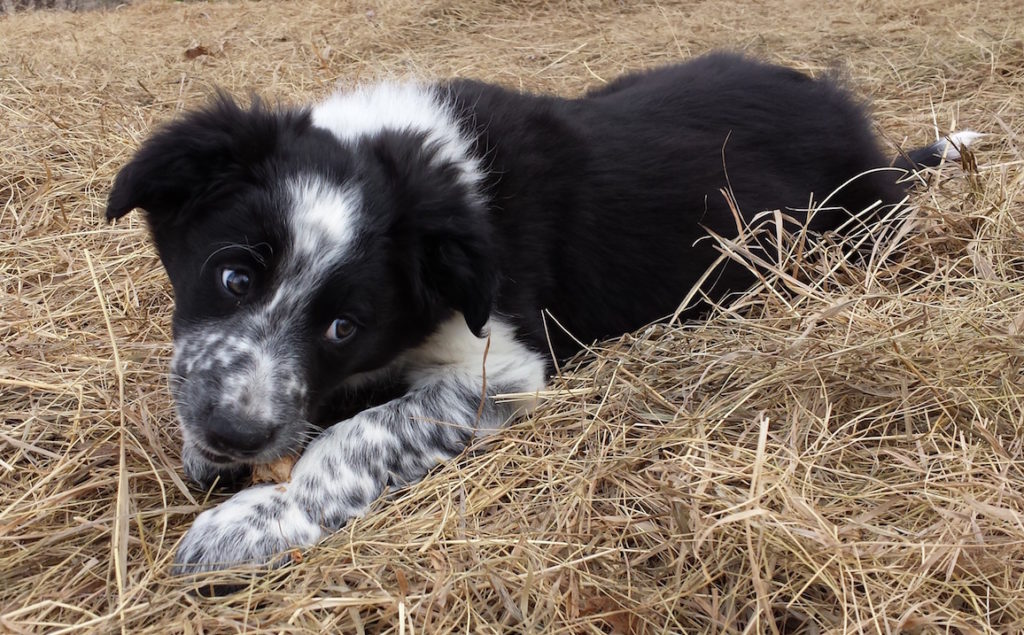 I’ve heard it said that women always forget the pain of childbirth — otherwise no one would ever have more than one baby!

I think the same might be true of raising a puppy. You forget what a pain in the behind it is. I know I did because here I am with a puppy again.

Of course it’s also fun, exciting, joyful and too short. But some days . .

Like today. Well, it started yesterday, because my puppy Pi’s schedule got kind of screwed up. She usually sleeps through the night, about eight hours. But last night I had just gotten to sleep when she woke me up around 11:30. I took her out and she peed. Yay. Back to bed.

I’m pretty sure she fussed again in the middle of the night but I’m a heavy sleeper so I didn’t really wake up until her usual call at 5 am. I’m so glad I’ve been letting her sleep in an ex-pen instead of a crate because she’d pooped during the night (which has never happened before). Amazingly it only got on one of the toys and she didn’t walk or lay in it. Yay again.

It was pouring rain and before I could grab my muck boots Pi peed on the floor. Well, at least I didn’t have to go out in the rain. Put her in her crate and cleaned up the ex-pen. Usually she will settle down for another hour after her 5 am potty break, but like I said her schedule was messed up. So I had to play with her. I took a break to make some coffee and she peed on the floor. Sigh.

OK, it’s in the kitchen, totally puppy proofed, ceramic tile floor. No big deal. Played some more, gave her some breakfast, let her and the other dogs out in the rain. Pi just goofed around so I figured she was good. Wiped the water and mud off everybody.

Back in the kitchen to clean up last night’s dishes. Pi was entertaining herself with all her toys so I sat down to check email, keeping one ear on puppy to make sure I didn’t hear the sound of teeth on woodwork. Just play sounds.

Then I notice one of the adult dogs laying by my feet, ears pinned back, looking worried. Hmm. So I get up to see what Pi is doing on the other side of the island.

Rats! A little pile of poop. Then over there another tiny poop. That’s weird. She isn’t a dog that walks while she poops. Then I see some smeared poop a few feet away. Yeah, she wasn’t playing with toys, she was playing with poop! Arrggh!

It’s also occurred to her the last couple of days that poop might be edible. Hers or the other two dogs’. So now I have to stalk everybody every time they go out to potty so I can pick up before Pi has a disgusting snack. (I wonder if Sigmund Freud ever had a puppy.)

Put Pi in the crate. Picked up, sprayed, wiped . . . ugh, the floor is black, I’m pretty sure I’ve missed some poopy footprints. I need to mop the whole floor. But there’s too much dirt and dog hair to just mop, so vacuum first, then mop.